In this episode we’re to going to listen to Andrea who tried Practice Test 7 on the subject of ‘work’.

Welcome to the IELTS Language Lab, brought to you by Peter Travis from ieltsspeaking.co.uk. In this episode we’re going to listen to Andrea who tried one of the free Part 2 practice tests we’ve published on the ieltsspeaking website. The task was Speaking Practice 7:

Describe your ideal job. You should say

and say why you would enjoy this job in particular.

The first time you listen decide if Andrea answers the question appropriately.

Well … my ideal job … I don’t really know what this job is I don’t even know if it exists but … I don’t wanna be stuck behind a desk and I don’t wanna work full time so it would have to be like … a great job I don’t know a part time job that I don’t actually needed to be seat on a desk working at an office I would like to work in free spaces and I would like to be creative to use my creativity to do something maybe a manual work but … I don’t really know …I only really need to be creative and to get … get along with people well and I don’t think it will be easy to find this work because I don’t even know if it exists I am actually looking for it and when I’ve found out what job it is believe me I will try everything I can to get it.

Andrea responded to the task appropriately but her answer was rather short and she could have spent a little longer on the subject. She could have developed her answer by speculating on a particular area of work that appeals to her, such as marketing, design, photography and saying why that kind of job would suit her. Candidates don’t have to answer all parts of the task but making notes against each point during her preparation time could have helped her to extend her answer. See the transcript of this podcast for an example. 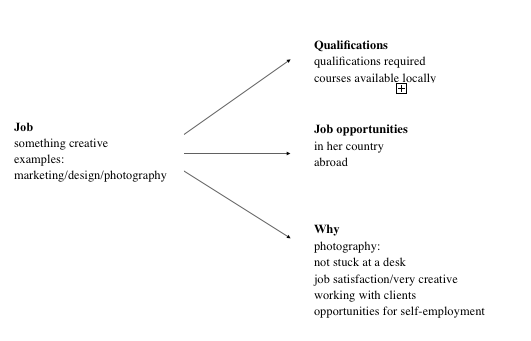 Now listen a second time. How well do you think Andrea did using the IELTS assessment criteria?

Andrea’s use of English was good. This task requires the candidate to imagine or speculate and there were several examples of where Andrea did this accurately. For example:

There were a couple of mistakes during her talk. Can you spot what they are in these extracts?

In the first extract there were a couple of incorrect prepositions and a wrong verb. It should be something like:  ‘I don’t actually want to be sat at a desk working in an office’
The second extract should be ‘maybe manual work’. The indefinite article shouldn’t be used as ‘work’ is uncountable.

Andrea had a good range of topic vocabulary using expressions such as:

Andrea also showed she was able to use different forms of words accurately such as:

Andrea’s fluency was very good. She used the informal pronunciation ‘wanna’ instead of ‘want to’ and this is used by fluent speakers all the time in casual, informal conversation. However, it’s questionable whether it’s a good idea to use it in a more formal context such as an exam of job interview. Speakers tend to regulate their speech depending upon the situation they are in and it might be a good idea to use the full form instead.

Andrea’s pronunciation was quite clear and listeners should have little difficulty understanding her.

That’s the end of this lesson. Over to you. Why don’t you describe your ideal job in the practice test or leave a comment in the comment box below?

Get our FREE Roadmap to IELTS Speaking Success: 10 steps to Exam Success!

Get that TOP grade you need with IELTS Speaking Advanced. More ...

Who we are, what we do and what people are saying about us. More ...

Any time. Any place.

This website is mobile-friendly so you can prepare for IELTS whenever and wherever you wish. More ...

We all know studying a little each day pays off and will help you get that top grade you're after. However, we all lead such busy lives and simply REMEMBERING to do this can be a challenge, never mind actually sitting down and doing the work.

Well, we'd like to give you a helping hand. Join us on Twitter or Facebook and get daily updates from us featuring a short, bite-sized exercise to help you prepare efficiently and effectively for your exam.

Sign up for our FREE ebook: 'Roadmap to IELTS Speaking Success':